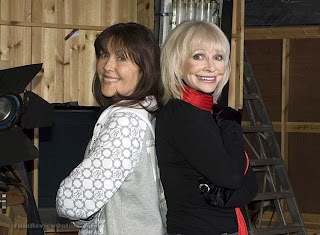 Sorry I'm very late again last time!   But this time around to make-up what's happening, I got a report to tell you!
So here it is.....


Sarah Jane Smith is reunited with another of The Doctor's former companions, Jo Grant (Katy Manning), in a new series of The Sarah Jane Adventures, set to air on CBBC this autumn. They'll be joined by The Eleventh Doctor (Matt Smith), in a special edition of the show penned by executive producer Russell T Davies.
The two episodes will see The Doctor and his two former time-travelling partners caught up in an alien-busting adventure that will entertain Doctor Who fans of all ages.
Elisabeth Sladen, who plays Sarah Jane comments: "It's a fantastic script and I can't wait to work with another Doctor and hope Matt has fun with us. I've known Katy for ages and I am delighted to be working with her. I last met her in LA but this time we will be in Cardiff. LA was good but Cardiff is better."
Katy Manning, who recently returned to live in the UK again, adds: "Playing Jo Grant again is something I never really considered. I was gob-smacked when they told me and I am over the moon. What an incredible little treat. I come home and this is one of the first things that happens."
Executive producer Nikki Wilson says: "We are absolutely thrilled to be introducing Sarah Jane and the gang to both The Eleventh Doctor and Jo Grant, and to have a script penned by Russell T Davies is the icing on the cake!
"Viewers are in for a real treat, with an action-packed story full of Russell's usual wit and warmth, which takes the gang inside a secret base beneath Snowdon and introduces brand-new vulture aliens, the mysterious Shansheeth. All this, plus a trip to an alien planet – a first for The Sarah Jane Adventures."
Featuring the usual mixture of thrills, laughs and scares, the fourth series promises fun with enemies old and new, including the terrors of the Nightmare Man and a dangerous journey back into history.
A galaxy of guest stars are lined up to appear in the series and include Laila Rouass (Primeval, Footballers Wives) and Cheryl Campbell (Pennies From Heaven), whilst David Bradley (Argus Filch in Harry Potter) will provide the voice of the Shansheeth.
Oh WOW Jo Grant and the 11th Doctor here on SJA!!!!
Posted by sarahjane2x@gmail.com at Monday, April 26, 2010 Links to this post 0 comments